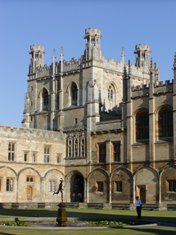 Six bells were transferred to Christ Church from Osney Abbey in 1546. These were placed in the cathedral tower and four more were added in 1680 to make ten. In 1872, the bells were moved to a wooden structure above the Great Stair that was described by C. L. Dodgson as a ‘meat safe’. By 1879 this had been clad in stone and the Wolsey Tower completed where the bells remain today. Two more bells were added in 1897 and over the years a number of bells have been recast but with two of the original Osney Abbey bells survive (the ninth and tenth) from c.1410

Link to ChCh entry in Dove’s Guide for Church Bellringers